So the workshop mentioned in the previous post went off without a hitch, and while everything is still fresh in my mind, I thought I would post an account of my perspective. (As I was the person who had the idea and organised it I am possibly a bit biased, so keep that in mind when reading this.)

How do you describe a day full of inspiration and exciting company in just a few lines? As I don’t want to give you a line-by-line account of what happened (which probably isn’t that interesting), I am going to keep to one of the devices that we used to engage our delegates – reflective book making.

Back in December I had met with Sarah Williamson of the University of Huddersfield and she had introduced me to this idea – she asks the attendants at a conference for her post-graduate students to reflect on the papers given in a visual way making their own concertina books over the course of the conference. When starting to plan my workshop I was keen to use this idea, and with Sarah on board as one of the speakers, we started delegates off giving them a long paper-strip to use as they saw fit throughout the day. 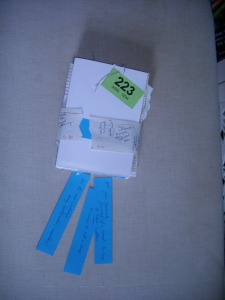 Here are some images of mine, and what they remind me of…

While still a bit plain from the outside – something I want to work on a bit more in future – it is hard to contain, bursting with ideas. I used the ticker tape describing the journey of the first session as a belly band, but had to extend it slightly. Some thoughts are leaking out, which actually are reminders for me which will find their way into  my diary to be acted on later: 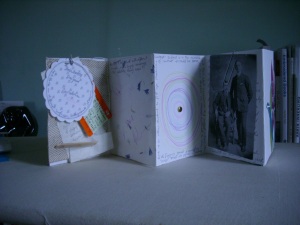 The first session of the day was led by Pat Francis, who treated us to some of the activities from her trasure chest of things to do in order to develop reflective writing. (You can find out more about those in her book Inspiring Writing in Art and Design: Taking a Line for a write.) So the first few pages of my book are filled up with her warm-up exercises and then ways to get people writing (like the use of objects or photographs as starting points). This was really enjoyable and I picked up some ways in which I could improve some of the exercises I do to get my students to start putting pen to paper.

What I particulalry liked and will definitely integrate into my own practice is the idea of the concentric circles to visualise context. This is something I find my students struggling with, and using circles of different colours and sizes to show how things relate to each other seems like a really simple way to get this across and allow the students to explore this further.

After lunch it was Sarah’s turn to talk about her work with collage as a reflective tool. The pages in my book (again a bit sparse, I do want to draw a bit of a background to this) show that I was really thinking about this as letting the thoughts and ideas ‘bloom’. One of the things she highlighted was how many people (researchers and people experiencing this strategy alike) use the physical act of making in order to develop their ideas – it gives the thinking time to grow, which is a real strengths.

I added little faces into my petals to show two other ideas – on the one hand how putting things onto paper allows you to see your work from different perspectives – literally, but also through different frames of mind. I think this is particulalry important, and much easier when doing something visual rather than something written, words tend to pin meanings down (which of course is their strengths, but it is important that this pinning down isn’t too soon in the thinking process). The other idea about the faces is the point Sarah mentioned about having a ‘critical friend’ with whom to talk through what you have done. In a way this is then putting it into words, allowing you to find your topics, issues and possibly discovering more in the process (not unlike I do now as I write about this for all you out there). The other page is mostly taken up by an illustration I found in my pack. these were randomly distributed and I discovered this wheel people were walking in (like an oversized hamster wheel) in order to move some barrels. This very much reminded me of the team, how for me the day was very much about finding like-minded people that might be interested in pulling at the same string than I do.

I also glued in some jigsaw pieces. I had decided to include jigsaw pieces in the packs (everybody got some random ones, like with the book pages), because I think that they are a good symbol of the integration of writing into practice – they might be separate techniques, but if they fit together they make a larger whole. So I was really surprised that in my random stamps in my pack I found a stamp with a jigsaw design on it! Serendipity clearly told me to include that in my book design.

The last speaker of the day was myself, so while I didn’t really do any collaging, etc. while that was on, I thought I should at least represent it in my book. Also Jennie, a lady sitting at my group table, had found a stamp of a fish in her pack and thought I should have it, so I thought I definitely should include that. So this page is basically made at home after the event with some stamps I made for the little blue books I gave everybody to take home. It is all about the Fish-scale of Academicness, which I will elaborate on in a future post.

So far the back of the book is empty, but I hope I’ll get the chance to fill this up later on.

Once I get the photos back from the workshop I’m hoping to post some more of the made books here – if you were there and want to add your own account, just let me know!

Thank you again to everybody who came and helped make this such a good day!