As preparation for the second Writing in Creative Practice workshop (to be held at Staffordshire University on 24th May), Sarah and myself got together to try out and explore an activity to get us started on the day. We had been inspired by the work of Mary Frances, particularly her ‘cut-up technique’ of creating poetry from existing articles and texts, and other practitioners who use poetic inquiry as part of their research.

We each started with Martina Margett’s article ‘Action Not Words’ from the Power of Making V&A catalogue (edited by Daniel Charny), looking for phrases and words which caught our attention, cut them out and then reassembled them in a vaguely poetic format. These individual responses to the source material turned out to be surprisingly different as you can see in these pictures. 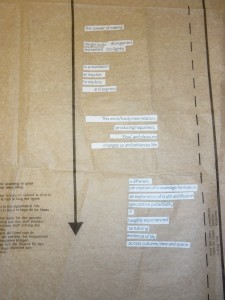 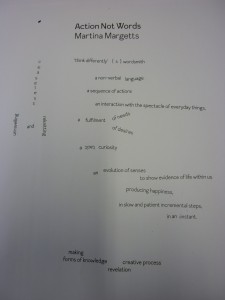 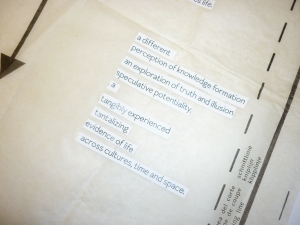 A detail from Sarah's poem

As Sarah’s colleague Judith Kidder remarked, these outcomes were almost like wordles or word clouds, but because they were not computer generated, they did not look for the frequency of the words, but rather related to the personal meaning that phrases had – invoking ideas, images and thoughts.

Looking at each other’s work we found intriguing similarities and differences – fascinated by each other’s choices there were some phrases we had both seemed to connect to, while there were others one of us had seemingly passed by. 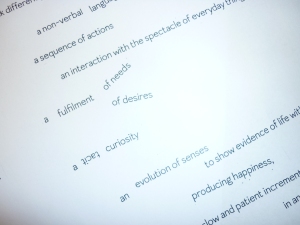 A detail from Alke's poem

Sharing the two works was an important part of the process, highlighting unexpected connections, making us want to revisit the original. We (with Judith) subsequently reflected on the potential this could have in our teaching, particularly the value of this as a means to get students to engage with academic texts. On the one hand tutors could prepare their own take on a text in this visually poetic way in order to entice students to give the whole piece a go. On the other students could be tasked with creating their own poetic response reflecting on an academic piece of writing – deconstructing and reconstructing a text.

P.S.: while the idea was to try this out for the workshop, we were so eager to start neither of us noted the time when we began. Consequently we have no idea how long it took, suffice to say that we ended up being quite engrossed in our making… sitting on separate tables in content silence, armed with scissors and glue stick, completed immersed in the ‘flow’ of the creative process.