Last week was a crazy week for me, but the highlight undoubtedly was the ReGenring Academic Writing and Assessment conference I co-organised at Nottingham Trent University.  (And as co-organiser I might be slightly biased as to how fabulous an event it was…) I promised to write this up quickly for some people who couldn’t join us, so here are my impressions of the day:

The Trent Institute for Learning and Teaching that was hosting us had booked us into a great lecture theatre in their conference centre in the Newton Building. This location worked really well, apart from the fact that they don’t allow you to put up your own signage. Official signage apparently has to be ordered weeks in advance, and we didn’t quite make that deadline, so in a way the day must have started for many people with the challenge to find the room…

But find it they did and then delegates were immediately set the task of making their own name tags, my favourite way to start a workshop. Turns out it also works for a conference. With more delegates than I had previously worked with coming, I had been a bit worried whether we would have enough ‘making’ space, but people seemed to make good use of the set up table and then drift over to continue started conversations on the other tables once their name tag was finished. 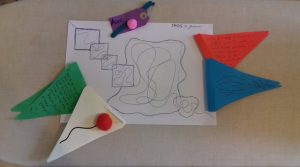 some of the things I cam home with

After a brief welcome by my co-organiser Lisa Clughen and myself, we started off with a talk by Julia Molinari about what makes our writing academic. This was a great start to the formal part of the day, as it set out a theoretical background for the question of where academic writing sits within the production, reflection and dissemination of knowledge – and whether it is the only way of doing these things. Julia argued for diversity within work with examples from long ago (Galileo argued his findings as a conversation) and from right now (and one of her examples, Nick Sousanis, we would hear from directly later on). What I took from her talk was questioning the contexts of ‘theory’ and ‘academia’ – and becoming more aware of the differences of these contexts (which might in turn help to break down the traditions of the latter).

After this theoretical grounding, we moved into the practice when David Hindley and Lisa Clughen talked about student perceptions and experiences of academic blogging. This was a reflection on the evaluation of one of Dave’s modules that asks students to write an academic blog post of 600 words as an assessment instead of an essay – plus making 3 informed comments on posts their peers put up. I was really interested in this, as it is a very different way of using blogging than I use (I use it to formatively prepare research for an essay at the end). Introducing the comments as a way of engaging the students beyond their own research seemed to work very well, and what also was interesting was that all students contribute to the same blog, hosted by Dave, so he is the person that posts the contribution, so he de facto becomes the editor, which allows to cut out concerns about students posting inappropriate material. While these practical aspects were interesting, the findings from the evaluation, which included questionnaires and focus groups, really were the star of this talk. They showed how students were not only feeling empowered by this way of contributing to debates in their field, but also how they found the joy in the research and writing. Clearly this works! 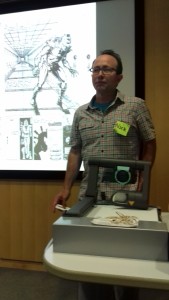 Our third keynote speaker, Nick Sousanis, gave a very eloquent and entertaining whistle-stop tour of his work, with specific focus on Unflattening. I have mentioned this book on this blog before, and if you haven’t looked at it yet, you should really get it! Nick’s subtitle for his talk was ‘reimagining scholarship through comics’ and he also talked about some work he does with students who are not confident when it comes to drawing, but that the format of comics – the combination of text and images, but particularly layout of pages within and around the boxes and the gutter – is a rich environment to explore when you are exploring what you are trying to “say”.

After all this food for thought, we needed some actual food and therefore relocated to a room a floor above to have lunch. I wasn’t really at lunch, as I was setting up the afternoon session, but when I popped up to grab a sandwich it was great to see how many people were sitting together and talking with each other.

While the morning had been carefully scheduled, we had planned the afternoon as a ‘Sharing Session’. Whenever I am going to events like this, it often seems like there is too little time to think and talk through the presented ideas. So instead of planning more formal presentations, we had put out a ‘Call for Practice’ so that people who are using alternative genre as assessments or in teaching could self-nominate and bring some materials to share with interested delegates. As we were particularly interested in the process of (re)genring, I had designed a simple template that I fed the information I had from people into, so that everybody who had responded to the Call for Practice could have a poster made that showed off ‘their’ genre within a very simple theoretical framework (looking at the gains and losses – I think I’ll blog about the details of this separately in the next few days). So when people drifted back into the room after lunch (or after going for a walk, or visiting the local comic book store), we had the posters set up and the people who had brought examples, etc. started to show off their practice. This worked really well, there was a lot of conversation around the room, clustered around posters as well as continuing conversations around the tables. We didn’t just have tea, coffee and cake, TILT had also sprung for some prosecco (particular thanks to Lisa for this brilliant idea!), so it really felt like a celebration.

Nick then led us in his Grids and Gestures drawing exercise. This was something he had mentioned in the morning, when we didn’t have the time for it. And it turned out to be the perfect thing for the afternoon, drawing together the sharing session with an activity (must remember that for the next conference!). If you want to know more about Grids and Gestures – and maybe do your own -, check out Nick’s blog here or his write-up of the activity in the SANE journal here.

We ended the day with Fiona English drawing the different strands together in a plenary. She reflected on the richness that using different genres allow to communicate (and produce) research, and that maybe investigating genring and regenring within a theoretical framework will allow us to convince the sceptics about the usefulness of this as a process.

I wanted to end this post by telling you about feedback bunting, but I’m already over 1000 words, so will leave that, too, for another post on another day. But I do want to say thank you to all the people who came to this day and made it so successful, and particularly to Lisa, my co-organiser! One of the feedback comments ended with “more please!!!” – we will try our best!